Government introduced a new law to protect communities against rape and other sexual related crimes. The new law is called the Criminal Law (Sexual Offences and Related Matters) Amendment Act 32 of 2007. This new law which is also known as the Sexual Offences Amendment Act (SOAA) is required to protect victims, especially women, children and people living with mental disabilities that have been raped or have experienced sexual crimes. 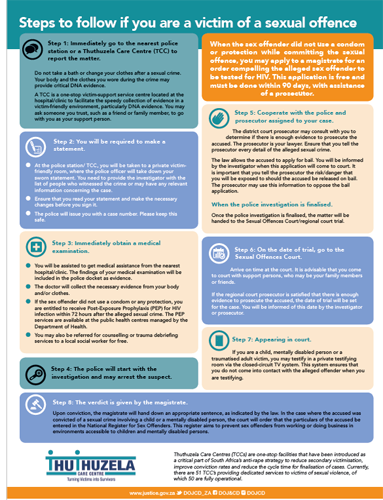 WHAT ARE SEXUAL CRIMES (OFFENCES)?

WHO CAN BE A VICTIM OF RAPE OR SEXUAL CRIMES?

Anyone (women, men, children, babies), irrespective of gender can be a victim of rape and it is not their fault that it happened. The SOAA requires all criminal justice officials (Police, Prosecutors, Magistrates and Court Clerks) to deal with all reported sexual crimes without discriminating against victims because of race, nationality, sex, age, sexual orientation or any other reason. The Department has upgraded various regional courts into sexual offences courtrooms, compliant with the new Sexual Offences Courts Model. Follow this link to view the list of Sexual Offences Courtrooms.

The SOAA recognises that in our communities the majority of victims of sexual offences are children, women and persons living with mental disabilities. It further extends the responsibility to members of the public including government and private institutions to report any form of sexual violence against all vulnerable persons.

You have the right to:

1. Dignity and Privacy - When you report cases to the police and at a public hospital or clinic. When you report to police, you will be taken to a separate room where you can speak in an office or environment that you are comfortable with.

2. Information - When you report to a public hospital, you will receive information on procedures required to have the alleged perpetrator be tested for his or her HIV status and right to receive Post Exposure Prophylaxis (PEP).

3. Treatment - The courts will appoint a competent person to act as an intermediary in cases where, a witness under the age of eighteen would suffer undue mental stress if he or she were to testify at such proceedings without the assistance of Intermediary services.

Any referral made in respect of a person or child that is/was a victim of sexual violence, must be to an accredited centre or shelter. The booklet on "Victims of rape and other sexual crimes" provides a list (and contact details) of centres and shelters which have been assessed for capacity to provide service to victims of sexual violence.